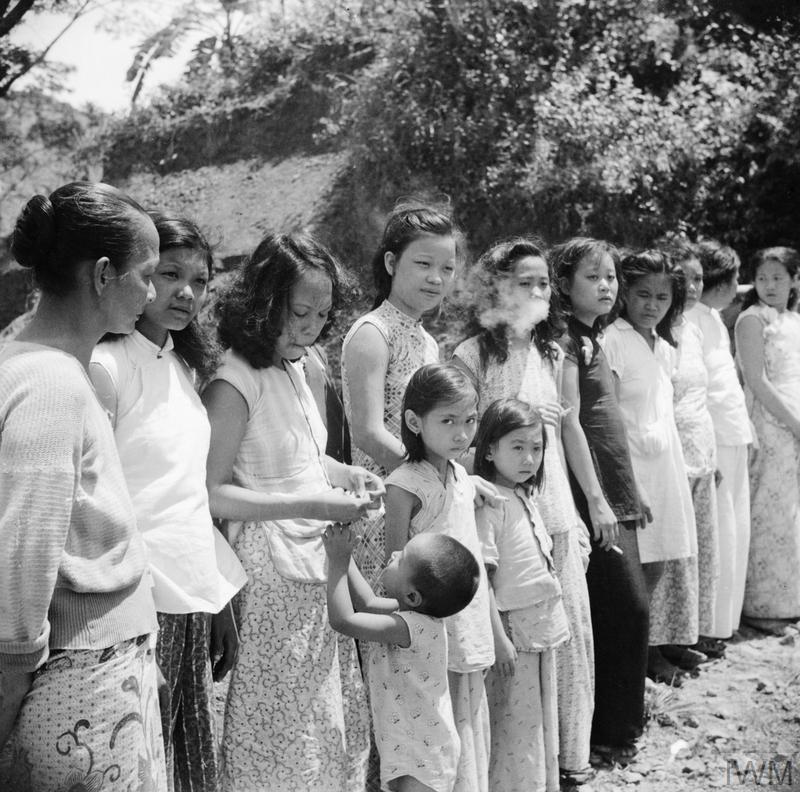 The Allied Reoccupation of the Andaman Islands, 1945

One of the books that I found gives an amazing inside look into how it was for these women is Chinese Comfort Women: Testimonies from Imperial Japan's sex slaves, written by Peipei Qui. This novel is a series of works put together to give not only historical context but also to give primary accounts of what happened.  One of the women that gave her oral history on what happened to her during her time as a comfort woman gives a good amount of information on the struggles she went through and the pain that she experienced. Liu Mianhuan is one of the oral histories and she tells her story of being kidnapped by the Japanese military and her experience. “The soldiers drove all the villagers to the meeting place where there were haystacks and, after forcing everyone to squat down, they began to pick out girls of the crowd.”[1] It all started by the soldiers picking out random girls from her village and taking them. They were repeatedly beaten and raped. While she was immensely miserable she tried to survive and reunite herself with her family. “I wanted to die but that would have saddened my parents, so I told myself not to die but to endure.”[2] These women were forced to be sex slaved and the only thing that would help them want to live would be the possibility to see their families again.

The second source that I will be using is the Japan's Comfort Women: Sexual Slavery and Prostitution during World War II and the US Occupation. Written by Toshiyuki Tanaka, this book writes about how comfort women were gathered and exactly what happened to them under Japanese military control. While this book states that the Chinese comfort women didn’t receive the highest level of violence and mistreatment they still were some of the first ones to be taken under Japanese control. “On the contrary, even after the full-scale mobilization of Korean women as comfort women, numerous sexual crimes were committed by Japanese men through out the occupied territories in China.”[3] What is interesting here is the fact that in this case Tanaka is saying that Korean women soon replaced Chinese women because the Japanese military felt that Korean women would be better for what they needed. This still did not stop the way that Chinese women were treated.

Using the website, Asian Women’s Fund and the Comfort Women Issue, only helps to shed light on how Chinese comfort women were and are often not recognized or even acknowledged. “Japanese military personnel had raped Chinese civilian women in occupied areas on numerous occasions…”[4] While Chinese women are mentioned in the online exhibit they don’t have a full tab or designated area to themselves compared to other nationalities that have much more information written on them. While the exhibit does a good job of speaking on Korean, Taiwanese, Philippina, Netherlands and Indonesia, it simply states women from China as “other countries”. In this way these women are not getting any recognition or even able to tell there own stories compared to some of the other oral histories and documentation they have on other races.

My final article that I would like to bring in is Issues Surrounding the Wartime “Comfort Women” written by Hayashi Yōko. In this article Yoko is trying to talk about how the Japanese military came to introduce the idea of comfort women and the role that the Chinese women played during this time. “In addition to Koreans, women from Taiwan, China, Malaysia, Indonesia, the Philippines and the Dutch East Indies (present-day Indonesia)-areas either colonized or occupied by Japan-have come forward to speak about their victimization as sexual slaves during World War two.”[5] Once again Chinese comfort women are simply mentioned. They are not given the right amount of attention that they deserve. This is important because it also brings in how after so much time has passed these women are now bringing lawsuits against the Japanese government for what happened to them in order to seek justice.

In conclusion the Chinese Comfort Women are some of the most underrepresented margin of women to come out of the World War II era. They have been left out of history with their stories and struggles never really told to anyone, always having to carry there dark pasts inside. These women are fighting for recognition, reparations and justice for the fate was thrust upon them.

From the novel, Chinese Comfort Women: Testimonies from Imperial Japan's sex slaves, written by Peipei Qui I chose Liu Mianhuan as my Oral History. Being the only survivor of her parent’s children she was everything to them. But before turning sixteen she was abducted right in front of her mother by the Japanese Army. From here she was held prisoner and forced to become a “comfort women” for the military. Being treated as a sex slave there was no true happiness in her life except for the thought of one day returning to her family. This is how her next few years would be. She speaks on the terrible ways that she was treated and the rapes that she had to endure, five or six times a day. All this happened to her so young that she became very ill and was eventually released back to her family since the soldier felt she was of no use and her father had bribed them. But even after she was home they came looking for her once more but she hid safely and was not found. While she told her story she still cried due to the fact that she was able to recall the terrible things she had to endure as a child.