From Co-Prosperity to Japanese Colonization 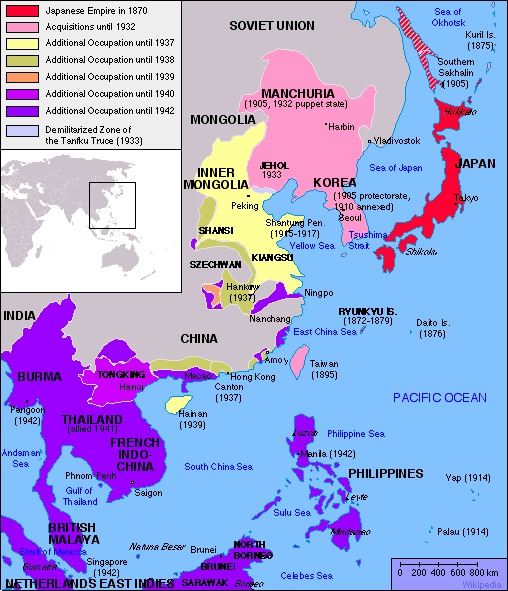 Map showing the span of the Japanese empire and when they occupied the surrounding countries.

From Co-Prosperity to Japanese Colonization

The Greater East Co-Prosperity Sphere was Japan’s concept of colonization and empire within Asia, in order to control other countries and use their resources for the war effort. At the beginning, the idea was proposed that Japan would unite and lead these countries in a council similar to the United Nations and push out Western influence, but the implementation quickly grew into complete control of the countries by Japan. The Co-Prosperity Sphere was at first accepted by the countries Japan arrived in, but Japanese nationalistic ideals corrupted the Co-Prosperity Sphere and the colonies of Japan quickly found themselves under complete control by Japan. Japan exerted control over the colonies by implementing Japanese as the official language, making deals with local religions to control the populace, and censorship of anything not approved by Japan.

At the initial implementation of the Co-Prosperity Sphere we can see countries previously controlled by European powers welcomed Japan as a savior of their country, such as in the Dutch East Indies, or modern day Indonesia. Within the book “Japan At War” by Cook & Cook we can read the oral history of Nogi Harumichi who discusses his experience in occupying the Dutch East Indies while working for the navy’s administration of Japan. When Harumichi first arrives in Celebes, Indonesia, he believes Japan’s occupation of the country will be excellent for the people living in Indonesia. He believes that kicking out Western influence will lead to a greater life for the people of Indonesia, and eventually its independence as Japan had promised to help Indonesia toward that goal. Harumichi describes his meeting with native Indonesians and how promising things seemed at the beginning, “The haughty Dutch who had lorded it over the Indies found themselves prisoners overnight. When I got to areas where Japanese forces had never been, village chiefs welcomed me…they waved the Sun flag and the Indonesian flag too. I felt we were doing something wonderful there. To me, at least, they looked as if they favored us.”[1] This time of good feelings would soon pass as Japan began to exert dominance over the colonies.

Language is the backbone to any society, and forcing your colony to use only the language of the motherland is a show of power. An excerpt from a 1943 article of “Pacific Affairs,” a scholarly journal published by the University of British Columbia, dedicated to political and social issues throughout Asia and the Pacific, had this to say on the matter of the Japanese language being pushed in the colonies, “The Japanese language is praised as a superior one, bound to become the language of all Asia, and therefore one which all Asiatics will want to know and speak. But they have accepted the native languages of the Burmese, Filipinos, Chinese, and others as national languages of local and secondary importance. This, while Japanese is a required subject, taught as such every day in the schools throughout occupied areas, the national language receives little emphasis. At a recent medical conference held in Tokyo, Japanese was designated as the official language, but the native languages of the delegates were termed ‘auxiliary official languages.’”[2] After taking control of the language, the Japanese would move to control more aspects of the everyday lives of the colonial subjects.

Dominance over the religions of the colonies would be next for Japan, and as originally planned; the religions of the locals was to be respected, but things changed when Japan began to assert control. “Pacific Affairs” once again shines light on the matter, “Religious matters have not been forgotten in the construction of Greater East Asia. At the beginning, the policy toward religion was only that of toleration. The officials and military men were reminded by Tokyo that local religions should not be molested by the armies of occupation. However, the Japanese later decided that even non-Shinto religions can be put to good use.”[3] The article then goes into detail on how the Japanese have begun to make pacts with the religions of the locals, such as Muslims, Christians, Buddhism, and Confucianism, in order to have the religions pledge to work toward securing the implementation of the Greater East Asia under Japan. While not as underhanded as taking away the colonies languages and replacing it with their own, using their religions of the locals to control the populace is definitely dishonest.

Censorship was the final nail in the coffin for control of the colonies. An article from “Quarterly Journal” discusses the issue of censorship in Burmese newspapers with them saying, “Practically the entire current output of the Burma press is dominated by the Japanese censorship regulations and is fashioned to serve Japanese purposes. Publishers of Burmese newspapers are now being forced to observe the Shinjinbu’s (Japanese’ Bureau of Investigation) ‘Notice to Publishers’ threatening forfeiture and heavy penalties for publication in Burmese of anything which has not been approved by the Nipponese censors… two of Rangoon’s prominent Burmese newspapers which boldly expressed Burma’s nationalistic sentiments prior to the war, the Thuriya (The Sun) and the Myanma Alin (The New Light of Burma), are now operating under stipulations of a strict Nipponese censorship.”[4] The people in the colonies were being told how to speak and what was allowed to be spoken, but they would soon start to resist Japanese occupation.

The people of the colonies began to resist the Japanese as best as they could during their occupation. One example of this resistance is in Thailand where the journal “Far Eastern Survey” tells that ordinary Thai citizens were coming from the country side to group together and fight the Japanese before word of surrender had reached them, “They had traveled on foot from outlying districts to offer their services in the fight against the Japanese invaders. On being told of the surrender, they turned back the way they came with tears in their eyes.”[5] While fighting could not be done openly, the citizens began to fight back any way they could. The “Far Eastern Survey” again references this feeling of opposition, “Whether or not the pre-capitulation government was sincere in its adoption of the policy of resistance, the ordinary Thai people seem to have taken it seriously to heart…evidence is now forthcoming to show that, even though organized resistance came to an end through the capitulation of the government, the opposition of the Thai people still continues.”[6] As the war continued, more and more people began to rebel against the occupation, especially when they learned Japan was losing.

The Greater East Asia Co-Prosperity Sphere was Japan’s attempt at an empire, and it completely failed. They tried from the outset to respect the nations they were occupying, but as time went on, the noose around the necks of the countries began to tighten. The most affected were the average citizens, who had originally heralded the Japanese as saviors. As the occupation dragged on it was the citizens who had to endure not being able to use their own language, their religion consorting with the Japanese to convince them siding with Japan was right, and outright censorship on what they could say.

Nogi Harumichi discusses his experience in occupying the Dutch East Indies while working for the navy’s administration of Japan. When Harumichi first arrives in Celebes, Indonesia, he believes Japan’s occupation of the country will be excellent for the people living in Indonesia. He believes that kicking out Western influence will lead to a greater life for the people of Indonesia, and eventually its independence as Japan has promised to help Indonesia toward that goal. Things soon took a turn for the worse as allied bombings shook Japan’s hold on the country and news was starting to spread that Japan was losing the war in the pacific. In order to remain in control the Japanese military started to be stricter with the Indonesians and started out right lying to them on the conditions of the war. Indonesians faced censorship of their news and dissenters to Japan’s occupation faced execution. The Indonesia independence movement was completely shut down, with no one allowed to be against Japan. Harumichi first backed the Indonesians, but quickly had to start punishing them or face punishment himself through the Japanese navy. Harumichi eventually killed three American POWs after their planes crashed in an act of revenge. He was tried for war crimes and sentenced to thirty years’ hard labor in Sugamo prison in Japan for his murders. Harumichi notes that he believes the Japanese government does not see what was done in Indonesia’s occupation as wrong, and is justified as everything that happened was for the sake of Japan.