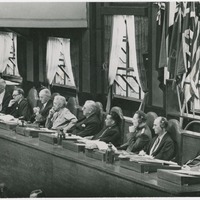 When remembering the events that took place during the Nanjing Massacre you will get mixed responses from everybody involved. Members at all levels of the Japanese Imperial Army and Government have denied that the massacre ever happened even though foreign correspondents had seen the brutality of the event. The fight for an apology and even the acknowledgment of these atrocities taken by the Japanese Imperial Army during the siege of Nanking and other events during the Sino-Japanese War is one that is still ongoing till this day.

The events that took place at Nanking were some of the most brutal to ever be recorded. To make sure these criminals would answer for their war crimes “even before World War II drew to a close, the Allies had organized war tribunals to bring Japanese military criminals to justice.”[1]The massacre that took place at Nanking impacted so many people because the killing of innocent women and children was on a level the Asian-pacific world had never seen before. Even though these tribunals were to take place, throughout history members of the Japanese Imperial Army, such as Tanida Isamu, blatantly denied the event ever happened. In an oral history between Isamu the question of how many people had the Japanese army killed came up, “You actually entered Nanking, didn’t you? What do you think? How many died?”[2]Isamu’s response of “I don’t really know”[3]  is a standard response you see from many throughout the incident. Even though thousands of soldiers took up arms against the Chinese during the siege of Nanking, “Only a handful of Japanese war criminals were tried in Nanking, […]. During the trials which lasted until February 1947 more than 1,000 people testified about some 460 cases of murder, rape, arson and looting.”[4]Even during the trials Japanese soldiers, provided with evidence of the atrocities still denied the events ever taking place. This can be seen in the trial of two army lieutenants Noda Takeshi and Mukai Toshiaki. “During the trial both soldiers, of course denied killing more than 150 people each, one of them blaming the article (Japan Advertiser article) on the imagination of the foreign correspondents and the other insisting he lied about the contest to better attract a wife when he returned home”[5]The Tokyo War Crimes Trial or the International Military Tribunal For The Far East (IMTFE) put these atrocities on center stage. “Unfortunately, many of the chief culprits of the Rape of Nanking – or those who might have exercised their royal authority to stop the Rape – never spent a day in court.”[6]

While these court hearings might seem like a positive, “no amount of discussion between the contending parties is likely to bridge this gap.”[7]This gap represents a statistical line of demarcation, on one hand you have the Chinese account of the incident which “estimates that total death ranged from a “conservative” 260,000 to 350,000 and asserts that between 20,000 and 80,000 women were raped”[8]and the Japanese ‘revisionist’ view that there were “seven cases of rape”[9]during the “entire scope of the Nanking Incident.”[10]This is only part of the complex argument from both sides. In Japan “the complex relationship between domestic politics and war issues makes war guilt a controversial topic”[11]which will further lead to the obscuring of the truth from the Japanese government. “To this day, despite new evidence pointing to Japanese culpability, various members of the Japanese elite, still largely conservative, continue to downplay or even deny official Japanese complicity, […]”[12]. “The Nanking massacre has become one of the symbolic events of the war, a paradigmatic example of Japanese brutality and Chinese victimization.”[13]Many throughout Japan share the belief that the Chinese government is using the Nanking incident as “a tool for gaining moral ascendancy over Japan.”[14]Besides outright denial some writers in Japan even blame the Chinese for the incident citing China’s scorched Earth policy which led Japanese soldiers without necessary supplies to raid the city and its civilians, and even the fact that the Chinese leadership left thousands of leaderless troops and civilians to fend for themselves instead of retreating with the troops and refugees in tow.

A lot of the controversy surrounding the topic has to deal with memory. In Japan, memories are particularly risky and painful. Part of the problem with the controversy going on for future generations is that some of the Japanese elite will have to come to terms with what their relatives did during the brutal siege and massacre that took place in Nanking which seems far from likely even though these tribunals have found members of the Japanese Imperial Army guilty. “Coming to terms with family members actions is not only for progressives. A common nationalist response to the actions of family members is to continue to protest their innocence.”[15]Until these people are comfortable with acknowledging the wrongdoings, the fight for an apology for the Chinese decedents of the people from Nanking will continue.

[15]Philip Seaton, 'Do You Really Want to Know What Your Uncle Did?' Coming to Terms with Relatives' War Actions in Japan, (Berkhamsted, Oral History Society, 2006) 55

Pictures of an Expedition

The oral history given by Tanida Isamu highlights one of the main issues with the fight to remembering the Nanjing incident, and that’s the lack of willingness to acknowledge the event even happened in the first place. Isamu “commanded the largest number of engineers under one man’s command in the history of the Japanese army during the Kwantung Army Special Maneuvers of 1941.”[1] The oral history follows a strict question then answer format where Isamu is presenting images that he had taken during the incident. Isamu denies the mass killings take place multiple times throughout the interview but finally acknowledges the thousands of dead bodies in front of one of the gates at Nanjing. Isamu fails to acknowledge the killing of innocent women and children during the massacre that took place in Nanjing, but highlights that he and his group of engineers made a park and a monument commemorating the Japanese occupation of Nanjing, which still stands their today.