Debate Over The Bomb 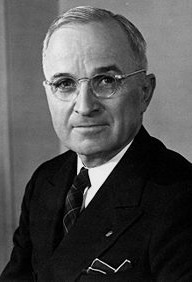 When discussing the decision to use the atomic bomb, it is important to evaluate the debate that took place as to whether or not the bomb was necessary to use. The debate happened in secret long with the majority of the planning and creation of the bomb. Both sides, for using the bombs as an attempt at ending the war and trying other means that may be less devastating, had many important political figures in the United States government, and later in the media, backing them up.

To fully comprehend the debate we must start by looking at the circumstances of the war before the bombs were dropped. Only a few months before the bombs dropped President Franklin D. Roosevelt passed away. This left Harry Truman, his Vice President, as president. While Roosevelt was president much of the Manhattan Project, the creation of the bombs, was left unknown to Truman causing the first few weeks of his presidency to be spent being briefed of the current status of the war and the Manhattan project. At this stage in the war the American Navy had cut off Japan’s supply line to and from their island bases as well as daily firebomb assaults on the main island killing and injuring hundreds of thousands of civilians. At this time the invasion of Okinawa was just beginning, though the support side would use this battle as an indication of the effects a full scale invasion of the mainland would have on not only the soldiers of either side but also the noncombatants. In September of 1944 the airman that would eventually operate the Enola gay and drop the initial bomb on Hiroshima begun to train with dummy bombs. The intentions of the tests were kept secret from the entire crew aside from Colonel Paul Tibbets, who would lead the mission. At the Yalta Conference in February of 1945 Russia officially stated they would only join the war in the pacific after Germany had been either defeated or surrendered. From this time until the end of the war the United States Government had one main goal regarding Japan, cause them to surrender, the debate came in the method they would choose to accomplish this.

Those arguing for dropping the bomb included Harry Truman, Winston Churchill, and Douglas MacArthur. One of the arguments used was based on the Invasion of Okinawa; if the Allies invade that could cost the lives of between 250,000 and 1,000,000 Allied combatants lives. There would also be copious amounts of Japanese soldier and civilian deaths with an invasion estimated to last between two weeks up to four months. Another argument was that the quicker the war ended the more lives of civilians and POWs could be saved. Many of the American POWs were put into work camps costing many lives due to poor conditions. There were a great number of civilians who were caught in crossfire in the battle of Okinawa and it was inferred that many more would be killed in an invasion.

The opposition to using the bomb included Ralph Bard, Paul Nitze, and Dwight D. Eisenhower. One of their arguments was that if America kept up the blockades and the fire bombings, eventually Japan will be forced into surrendering. The men recognized the situation that Japan was currently in and believed they were on the brink of losing the war of attrition. Another argument stemmed from the belief that a bomb with the destructive power would be considered a war crime if it was used on a civilian inhabited city.

In the end it was decided that America would use the bomb as a means to end the war in the pacific. In late July Japan was warned that if they did not surrender the Allies would use their new weapon against them. The first bomb was dropped on Hiroshima on August 6th, 1945 with the next dropping on Nagasaki on August 9th. When word got out of what America did the debate flared up again in the social sphere, with media and citizens alike contributing to their particular side.

This part of the Exhibition was created by Robert Guerra.

Michiko was walking to school through a portion of Hiroshima that had been destroyed by the city to create a fire break. The bomb hit and she passed out but her body was blown under some rubble. Her mother was able to find her and, with the help of some soldiers, they freed her. She suffered severe burns and had to undergo 37 surgeries after she was chosen to become one of the 25 “Hiroshima Maidens”. This shows the effects, during and after, of the innocents caught in the blast.