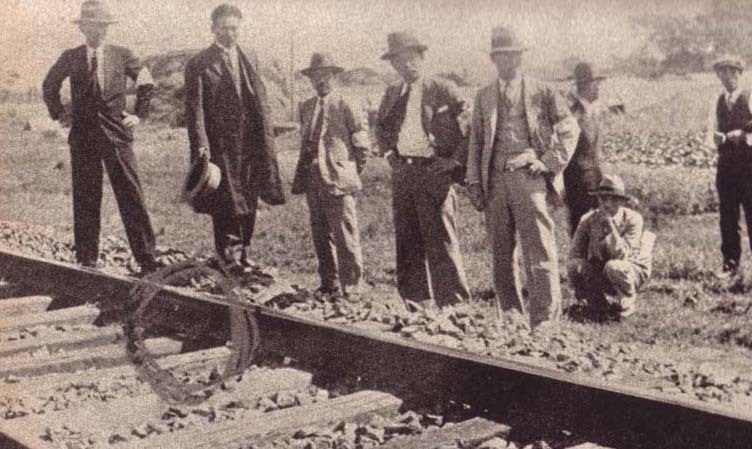 The Commission sent by the League Inspect the section of the railroad Japan claims Chinese soldiers detonated an explosive.

Japan is a small island nation on the edge of Asia not far from China and Korea. Following the visit by Commodore Perry, showcasing Western Civilization and industrialization the tiny island nation began its own process of industrializing and soon realized that it needed more resources to compete with the rest of the world that was continuing to grow around it. In lieu of this it needed land rich in resources to expand. Japan believed that colonization was the key and if it did not then it would never move forward. Looking at what Europe had done 400 years before in the Americas and had continued to do in Africa and Asia, Japan looked towards neighboring countries, and planned to expand towards mainland Asia.  Since Japan had started late in the game of colonizing she found herself in disagreement with Russia over land in Asia. Japan fought Russia in the Russo-Japanese War in 1904 and 1905 and won, setting the attitude that they were now a contender in the world.[1] This gave Japan the confidence it needed to colonize Korea in 1910. Still the need for land was a strong fever and the nation could not stop. The next stop for Japan was China.  The focus is on China and how the occupation of China began. Japan did not want to outright invade China, the League of Nations, was put in place to stop violent actions following World War One. The United States although not a part of the League was close to many of the countries within the League as well. The U.S. also supported many of the nations within the League.  Japan being a part of the League had to follow the rules and regulations that were established after World War One as well. This meant that outright invasion was out of the question. Japanese occupation of China was illegitimate for many reasons. The first was the Lytton Report, a commission looking into the case that China gave to the League of Nations claiming the Japanese were in the wrong for occupying Manchuria. The second piece of evidence is that Japan was willing to use poison gas against the Chinese, showing they did not already follow the Leagues rules anyway. Lastly Japan’s withdrawal from the League of Nations on February 24th, 1933 shows that a verdict was made and Japan not agreeing to it.

Japan tried to justify its capture of Manchuria in China by staging an incident. The Japanese military staged the Manchurian Incident at 10:20 P.M, an explosion of blasting powder went off, creating a large dust cloud and was shortly followed by a Japanese patrol finding it and reporting that the Chinese had tried to destroy the railroad line. Within the hour Japanese forces were in combat with the Chinese, steadily pushing them out of the Manchuria region. When the sun came up the Japanese air force joined in and fighting broke out, the Japanese military had successful created an incident to acquire resource rich land.[2]  China was in the middle of a civil war with communism on one side and the nationalist on the other. Mao Zedong and Chiang, the two different leader both agreed to halt the civil war and deal with Japan. Shortly afterwards the Chinese appealed to the League of Nations.

Japan first lost its official claim, but not physical claim of Manchuria, China because of the League's policy on aggression. Shortly following the Manchurian incident China appealed to the League of Nations. The League of Nations sent Victor Bulwer-Lytton to investigate, He along with four others commissioned to investigate spent six weeks in China. The commission personal looked over the section of the railroad Japan claimed was where the explosive went off. A 146 page document that was later called the Lytton Report was given to the League in 1932. The report found Japan was the aggravator in the situation. [3] Given that Japan was a part of the League of Nations it had to acknowledge the Report’s findings and solutions to fix the Situation. Japan’s lack of following through with the considerations and suggestions that the council gave shows that it was ignoring what a good portion of the world believed to be the right choice.[4] Japan did not have much of an argument anymore and it fighting in China only proved this more.

Even into the war in China Japan failed to follow codes and laws that the League had put into place and was supposed to defend against happening. Further supporting the idea that the occupation of Manchuria, China was unjustified. Gas soldiers were trained in the Japanese military and part of their training was to retrieve all evidence of gas being used. Poison gas had been outlawed after the first world war by the Geneva Convention[5] Even with the gas being outlawed it has been reported to have been used over 900 times in China alone[6]

Japan left the League of Nations on February 24th, 1933. The Japanese delegation was led by Yosuke Matsuoka, he the speaker for the Japanese and told those assembled that the Japanese had claim over Manchuria similarly to the British claim on Egypt and the United States Claim on the region of Panama. The League vote was unanimous with 42-1, Japan being the only country that did not vote for the proposal by the League to have Japan give Manchuria back to China. With the vote counted Yosuke Matsuoka gave a speech and him and his delegation left and stated that they would not be coming back.[7] The outright denial of the Leagues findings and later the denying of the proposed plan of action that led to the delegation leaving the League gives evidence against the Japanese for invading and occupying Manchuria, China.

The Japanese Military tried to stage an incident to give a legitimate claim on occupying Manchuria, China by blowing a portion of a railroad and blaming it on the Chinese troops in the area. When the League of Nations looked into the incident the Lytton Report was given to the the Council and the Japanese were reported in the wrong. The League then votes on the proposal to fix the situations and Japan leaves the League. Fighting within China shows that Japan is proving not to follow the rules with the use of poison gases. Each of these findings adds to the conclusion that Japan may have occupied Manchuria, China but they did not have legitimate claim to it.

V. A. G. R. Bulwer-Lytton, Report of the commission of Enquiry, League of Nations Appeal by              the Chinese Government, World digital Library

Tanisuga Shizuo was a soldier in the Japanese Army and he specialized in gas. His job was mostly to decontaminate areas where mustard gas was used, but he was also trained in the using of gases. The most important part of his training was the hide the fact that the Japanese military was using gases in warfare. Once he finished his military service he went and worked in a secret poison-gas plant on Okunoshima Island. During his time in the Japanese military he fought in China and used poison gas to fight the enemy. When war broke out with the United States in 1941 he mentions that the Japanese Army had not finished with the China Incident and that they would not stand a chance fighting the US and Britain. He states that he is part of the Poison-Gas Workers Associations and that the group is trying to get compensation for the injuries they received while making the gases during the war.

[3] Report of the commission of Enquiry, League of Nations Appeal by the Chinese Government, World digital Library Pg 66-67

[4] Report of the commission of Enquiry, League of Nations Appeal by the Chinese Government, World digital Library Pg 132-133