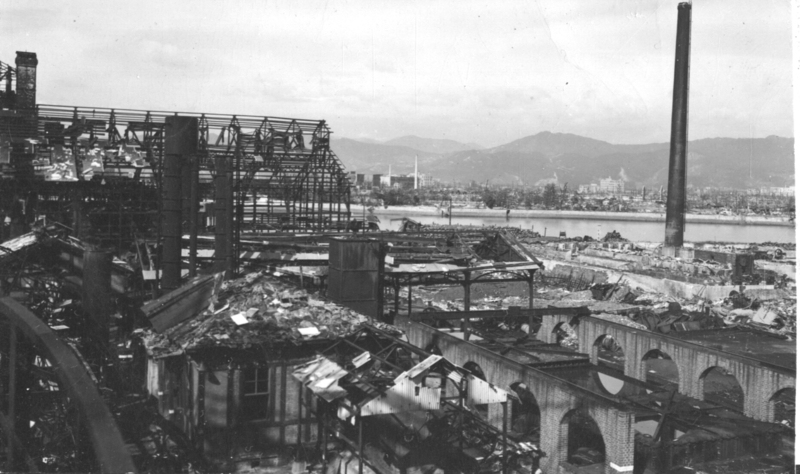 Hiroshima on New Years day in 1946, almost 5 months after the atomic bomb was dropped.

The Aftermath of Hiroshima

The war was coming closer and closer to Japan’s doorstep. The United States was creating a secret weapon not even their allies, nor most high-ranking officials of the United States government knew about. The citizens of Hiroshima were also unaware that they were going to be some of the last casualties of World War Two. Lives would be changed forever as well as future family bloodlines instantly erased from history and lasting effects would be felt over a lifetime for the citizens of Hiroshima. Citizens were unaware of their fate and were going on about their days. Men, women, and children all fell victim to the nuclear bomb that was dropped on Hiroshima. The bombing of Hiroshima caused the deaths of thousands of citizens instantly and more to the nuclear fallout and the lack of infrastructure which would lead to the deaths of many more Japanese civilians due to the devastating destruction by the atomic bomb.

The United States main goal for the Atomic Bomb was for it to be used on military targets only and minimize civilian casualties as much as possible. Hiroshima was used by the Japanese Army as a staging area but was also a large city with a population of roughly 410,000 people. Hiroshima was selected for the first bomb to be dropped and to be observed for future bombs that could be used in the future.

August 6th, 1945 was a typical morning for Hiroshima. The city was flourishing with activity of people going to work, children playing, and businesses opening. The warning signs began around 7A.M. with air raid sirens which was a common occurrence for the people of Japan and most ignored it. Around 8:14 A.M. however, is when Hiroshima changed forever. “On the way from the window, I hear a moderately loud explosion which seems to come from a distance and, at the same time, the windows are broken in with a loud crash.”[1] Once the bomb was dropped it was felt for miles of way and the damage was tremendous.

Once the initial explosion took place, it is estimated that 60,000 to 80,000 people died instantly due to the extreme heat of the bomb, leaving just shadows of where they once were. Fires broke out and spread rapidly while people were trying to find loved ones as well as figure out what exactly had happened.[2] The lack of people physically able to fight the fire and the weather increased the fires and the whole city became a blazing fireball all from a single bomb. Not only were people instantly vaporized, the people who did survive the initial blast, succumbed to radiation sickness and would later die a painful slow death. Sometimes symptoms did not reveal themselves until weeks or even years after being exposed to such high levels of radiation. “From the Twenty-fifth of August his hair started falling out…his mouth turned black.”[3]

Bodies of adults and children littered the streets of Hiroshima. Scorched bodies and shadows of once living beings that were caught in the crossfire of World War Two. “You couldn’t tell men from women. If there were breasts, that was a woman. Faces hung down like icicles.”[4] Hiroshima went to a busy city to a nuclear wasteland with little to no resemblance of a city. The smell of burning bodies and destruction left survivors in shambles with little to no hope in sight for most people. The world had never seen such destruction from a single bomb and this is what lead to other things that were unknown about this new weapon.

The radiation was not a new concept to the world, but how much radiation that Hiroshima had was unknown and soon became a testing center. Many people became sick months after the bomb dropped and it was initially thought that the United States had dropped a poisonous gas along with the atomic bomb. Sores soon developed on people’s skin which would be removed and reappeared, as well as skin becoming rougher due to high radiation exposure and due to exposure to the bright light that was emitted after the detonation.

The destruction of Hiroshima left a glaring problem for the people still in the city and the surround area, which was how to treat the wounded properly and effectively. Roads were blocked by debris and fires and most of the medical professionals died from the nuclear blast and or from radiation sickness before people could be treated. Not only was there a large population of people that were not receiving medical care, the Japanese Government was slow to respond with aid which prolonged the recovery process.

After the second atomic bomb was dropped, Japan surrendered and left a large mess to clean up throughout the Pacific theater. To help aid in the process, the United States set up a form of government in Hiroshima to help rebuild the city and give jobs to the people who were struggling to find work. This also allowed for the Red Cross to come in and start to treat the wounded but for many of them it was too late and they were slowly dying with little to no hope for them. Hospitals surpassed occupancy levels and people were tended in the streets where they had fallen when the bomb dropped. People also became test subjects for American doctors and scientists who flocked by the hundreds to observe the effects of the radiation on the Japanese citizens. “American Army doctors flocked by the dozens to observe him. Japanese experts questioned him.”[5] Hiroshima became one large research facility. Not only was it used for research it was also a relief point for Japan and other Asian countries that needed help.

The initial detonation of the atomic bomb lead to the death of over 60,000 to 80,000 people instantly and another 60,000 due to radiation sickness. In that time Hiroshima was destroyed and the surrounding area was also effected tremendously. This was also the site where the United States government set up a large scale recovery process due to Japan’s lack of resources for its people and allowed for medical treatment for people that were caught in the crossfire of the use of the atomic bomb. The bombing of Hiroshima caused the deaths of thousands of citizens instantly and more to the nuclear fallout and the lack of infrastructure which would lead to the deaths of many more Japanese civilians due to the devastating destruction by the atomic bomb.

This part of the exhibition was created by Grant Bostick.

Peter Wyden, Day One: Before Hiroshima and After (New York: Simon and Schuster, 1984).

Su, Shin Bok. “A Korean in Hiroshima” Japan at War an Oral History. Transcript of an oral History by Haruko Cook and Theodore Cook, The New York London Press, pg.387-391

Su, Shin Bok. “A Korean in Hiroshima” Japan at War an Oral History. Transcript of an oral History by Haruko Cook and Theodore Cook, The New York London Press, pg.387-391

Shin Bok Su was a Korean that moved to Japan in 1937 with her husband. She was very impressed by Japan’s power and was very happy to be considered Japanese citizens. When the war broke out even Korean immigrants were living quite well, they had white rice every night and also had money to spend even when rations got tougher. However, when the war got closer to Japan people got weary of the power of Japan. When the atomic bomb dropped, Shin Bok Su lost her 2 children and soon lost her husband to radiation poisoning. When she went to receive her compensation she was denied because she was not a legitimate Japanese since she was a Korean immigrant. This showed how Japan ended up turning their back on people even if they all were under one flag and how the atomic bomb did not just effect Japanese and it was a broader scale.