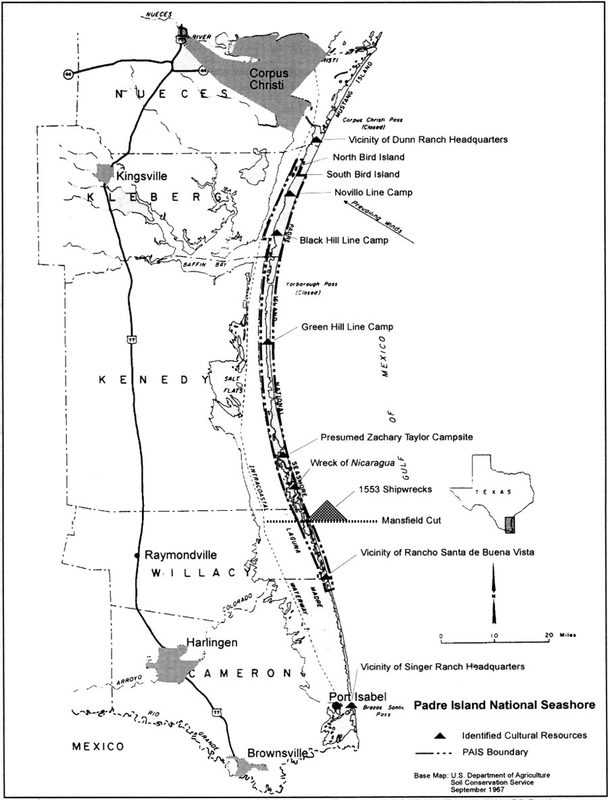 This map is of the Padre Island National Seashore in 1967. It identifies the locations of ranching headquarters and camp locations, the Spanish and Nicaragua shipwrecks, and the geographical spread and boundaries of the Padre Island National Seashore. It provides a historical reference to the park’s early resources, five years after its opening in 1962. (Since this work was created by the federal government, it is in the public domain.)

Along the Texas Gulf coastline sits a very unique island. Authorized by Congress in 1962, Padre Island National Seashore offers a variety of recreational activities such as visiting the park’s multiple beaches, windsurfing in its Bird Island Basin, and visiting the tourist center for knowledge of the park and its history. It is also home to wildlife like the Kemp’s ridley sea turtle and hundreds of different bird species. Padre Island is the longest natural barrier island along the Gulf of Mexico, covering sixty-six miles along the coastline.[1] Its natural environment and location make it a perfect place for people to enjoy outdoor activities. By examining the historical evidence of the park’s history and its use of natural resources; recognition of how humans have used the landscape over centuries by establishing communities, led to it being an ideal location for a national park.

Padre Island is young compared to the earth’s estimated age of 4.5 billion years old, and there is scientific evidence of this from seashells gathered from the island that have been put through radiocarbon testing, indicating that it may be as young as 3,000 to 3,500 years old.[2] Scientists have gathered common knowledge that Padre Island was created with the assistance of other barrier islands. Furthermore, there are many theories suggesting the creation of the island: formation of offshore shoals grew with the aid of split accretion, geographical variations in sediments, and sea level and sea currents helped to shape the island.[3] Over thousands of years, the island went through many geological developments including a glacial stage and the Holocene era. With the formation of short islands bonded with longer islands, the other barrier islands helped create Padre Island by moving sand to create a shelf, protecting the mainland area.This produced a landscape that would have been shielded from the harshness of natural disasters such as hurricanes, making it an ideal place for habitation. Moreover, it provided a setting full of natural resources for sustenance, supplying a habitat for indigenous peoples and explorers.

Between the 1500s and the 1800s, European countries like France, Mexico and Spain fought for the claiming rights to the Texas coastline which was a consistent marker for shipwrecks and exploration. According to archaeological documents, European Alvarez de Piñeda was the first person to chart and map the Texas Gulf Coast in 1519. The Spaniards also recorded their many encounters with Native Americans.[4] After a gulf storm wrecked a Spanish ship on the coast of what is now modern-day Mansfield Cut, they were greeted by one hundred Indians who brought them cooked food.[5] In the late 1700s, a deserted Indian village was discovered near the mouth of the Corpus Christi Bay.[6] Additionally, the first recorded permanent habitation on Padre Island was by European Padre Nicolas Ballí and his nephew Juan Jose Ballí in 1805, establishing Rancho Santa Cruz de Buena Vista on the southern part of the island.[7] With many people interested in claiming the area and numerous endeavors against Native Americans, the southeast coast of Texas endured centuries of legal battles for claiming rights to the land. Eventually, American ranchers used the parks landscape for raising livestock.

By 1839, wild cattle had increased in population size along the south coast, making it an ideal area for gaining profit. Additionally, Corpus Christi was establsihed as a major trading post.[8] Around the 1870s, cattle prices had been lowered and the invention of barbed wire allowed farmers to establish ranches. One family in particular, created a business that would connect the land usage all the way to the Mansfield Channel. This channel was significant because it allowed access to the Gulf Intracoastal Waterway and it provided a source for gathering an abundance of fish for eating. In 1883, Patrick F. Dunn, along with his brother and mother, created Patrick F. Dunn and Bro., designed for raising cattle on Padre Island. Their cattle business proved to be a lucrative venture producing 550 cattle and 100 head of horses.[9] They used the island to ship the cattle towards Packery Channel. In 1926, Patrick Dunn sold his cattle and most of the land to Colonel Sam Robertson, who was interested in turning the island into a tourist attraction.[10] Padre Island’s geography would change dramatically after he built a wooden causeway, with access to the a few resorts on the island.[11] Unfortunately, this causeway did not survive due to a tropical storm that hit the area in 1933.[12] With the impressions of World War II still in effect, activity around the island was put on hold. It was not until the 1950s that the park’s natural resources would be used for oil and gas operations, creating a slow decline in the cattle industry.

Between the 1950s and 1980s, Padre Island had experienced a surge in oil and gas developments. There was an estimated fifty-one drillings and petroleum processing sites.[13] In 1958, Texas Senator Ralph W. Yarborough petitioned for the first bill in Congress for turning Padre Island into a national park.[14] However, there were disagreements in the production of the park due to extractions of natural resources such as minerals from the sand and water. After many legal battles, President John F. Kennedy signed the bill in 1962, consenting to development of Padre Island National Seashore.[15] This would mark the beginning of a national park with access to the Texas Gulf Coast.

Padre Island National Seashore is unique because it holds a lot of history and it provides a habitat for so many wild animals. Its location in the Texas Gulf, makes it a desirable place for vacation due to its protected beaches and private entries. Along with the preservation of the barrier island, the national seashore has a long history of the island’s natural resources and it shares the history of the lives of those who have tried to settle it. It is certain there is no other beach in the Texas coast that shares its rare qualities.

[5] Scurlock, An Assessment of The Archeological Resources, 18.

[6] Scurlock, An Assessment of The Archeological Resources, 18.

[7] Scurlock, An Assessment of The Archeological Resources, 20.

[8] Scurlock, An Assessment of The Archeological Resources, 22.

[9] Scurlock, An Assessment of The Archeological Resources, 22.

[10] Scurlock, An Assessment of The Archeological Resources, 23.

[11] Scurlock, An Assessment of The Archeological Resources, 23.

[12] Scurlock, An Assessment of The Archeological Resources, 23.