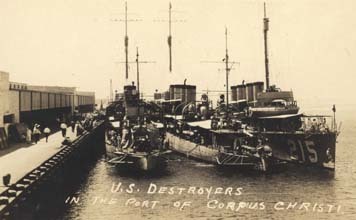 Photograph of United States Destroyer in the Port of Corpus Christi

Before the first Whataburger and the Heritage Park homes (being founded first in Corpus Christi) Corpus Christi was just a mainland surrounded by raging water and waves with highlands, cliffs, and tributaries. As time went on, nature changed it course around the bay and slowly formed an island system with its now calm waves with the separation of the wetlands and the bay. Now with an approachable climate, the bay was giving life to the new land, filling it up with plants, wildlife, and animals. The first inhabitants moved onto the new land for survival and their cousins, the Karankawas, later on moved in by the 1500’s in search of the area’s wildlife for food.[1] With more settlers coming into Corpus Christi Bay, potential use of the bay and land gave people ideas for a booming economic business. The Port was essential to Corpus Christi and made it a thriving city. However, it wasn’t an easy start to get the Port up and running. Many obstacles and decisions had to take place to make the Port an economic hub it signaled that the city needed to expand. The Port of Corpus Christi’s history can be contributed to the men that discovered the city and the different ways they used it to the men who established the creation of the Port and the many contributions these men gave, the vast materials for export and import cargo supply that comes in and out of the Port.

Before the 1900s, the story behind Texas history can be contributed to the explorers, missionaries, empresarios, pioneers, rangers, ranchers, cowboys, and farmworkers, who devoted thier efforts into this new land.[2] Many historians have speculated who first discovered the land. believing that French explorer Rene Robert Cavalier, Sieur de la Salle, was the first who saw the land.[3]  Legend has it that Alonzo Alvarez de Piñeda was the first one who sailed through on June 24, 1519, and named the bay Corpus Christi after seeing it on the religious catholic feast day of Corpus Christi (Body of Christ).[4]  In 1820s and earlier, Corpus Christi was the spot for contraband goods that were loadeded and unloaded from the sailing vessels and then transported to the North of the United States and into Mexico.[5] It was just a matter of time until the new area was seen as an money making town.

Other explorers soon followed pursuit and in 1839, Colonel Henry L. Kinney landed in Corpus Christi to open a trading post. Later he, established as a townsite in 1844 and in 1853, Corpus Christi was marked as a city. Kinney running the operations to the region, thought of land as “unlimited opportunities” to make business trades between the North and South. But when looking at the bay, Kinney noticed that the land can be so much more than just a business opportunity.[6] As new settlers started to arrive and settle in, the everyday life of the bay attracted certain people to Corpus Christi. The ability to tolerate the risks of the natural and man-made environment started area down its road to a deep-water port.[7]

During the early 1900’s, as the city was progressing, so was the population and business opportunities. In 1906, thousands of dollars of cotton, sorghum, and corn were lost when a freight blockade sidelined their crops for weeks. Two years later it happened again and for the first time, rural planters looked to Kleberg for help, and Kleberg offered relief: deep water. [8] Channel, island barriers, and other protected barriers were placed to make the city safer and make shipment flow easier. In 1919, Corpus Christi got hit by the worst hurricane that they ever endured during that period. The hurricane left the city a disaster and made officials and the residents declare a plan to rebuild the city to prevent the same thing from happening. Convincing the Committee’s chief engineer, Major L. M. Adams was the city next step for the city  geographically and economically logical place for the port and the entire region supported it. Roy Miller’s editorial expertise came to the fore with the 1921 publication of a magnificent brochure, The Corpus Christi Port Project.[9]  In 1852, the federal government recognize the Port of Corpus Christi, but it took almost seventy-five years of hard work and dedication by local citizens to bring their dreams to reality for the deep water port.[10] The Port was making the city grow.

In 1926, the Port of Corpus Christi officially was established as a deep-water port. Funding and donations came in from town officials, Roy Miller, Robert Driscroll, the Kleberg’s and others. Oil, gas, grain, and cotton made up most of the materials that Corpus Christi was shipping in and out. The maritime trade and industrial development converted this city as a metropolitan area remarkable for its combination of heavy manufacturing and cleanliness of environment.[11] The material resources development assured others that the city would have an abundant supply of material resources.  Roughly more than forty percent of residents of Corpus Christi owe their living to the Port.

Many bulk docks were being put in at the Port for each material.The residence of Nueces County were continually the progress demanded for passage of bond issues for the expansion and improvement of the port’s facilities.[12] Oil docks were used for the bulk product that come in with oil and chemicals, bringing in over forty million tons of petroleum products through the Port. In the 1930s, oil was the main commodity and today still brings in more than ever. By the late 1980s, the Port was dispensing more than twelve thousand bags of grain a day. Grain, an important material had large amounts of bulk passing through. In the 1950s, leaders for the Port recognized the grain industry’s contribution to the local trade and opened the public grain elevator to facilitate the export of South Texas grain.[13] As more material came in, more docks had to be installed for iron, coal, and petroleum coke because the demand of resources grew in the 1980s. Other cargo such as cotton, steel articles, food products, and sometimes even automobiles came in and out of the Port.

With the decisions of these entrepreneurs and the founders of the bay, the Port of Corpus Christi would have never had existed. The Port of Corpus Christi includes over  forty public and private docks that consists of four divisions known as: Harbor Island, Port Ingleside, La Quinta and the Inner Harbor.[14] Roughly thirty-eight percent of the residents of Corpus Christi owe their living to the port.[15] The community of Corpus Christi and the port together help flourish the city in becoming one of top ten largest ports in the nation. With the first settlers and inhabitants stepping onto an island not knowing that they encounter a booming business in sea-trade, but rather a beautiful sight that pertained an abundance amount of material.