In 1962, Rachel Carson published Silent Spring, a “landmark literary piece of the 20th century” that focused on the environmental impact of the use of pesticides, such as DDT.[1] Unfortunately, Carson and her work were met with bitterness and discrimination. Large corporations did not want to see their steady flow of profit cut off by the banning of pesticides and Carson’s peers, mainly male biologists, criticized her credentials simply because she was a woman. Silent Spring made its mark on this world by paving a way for new laws, new communities, new agencies, and most importantly, it helped prompt the modern environmental movement. 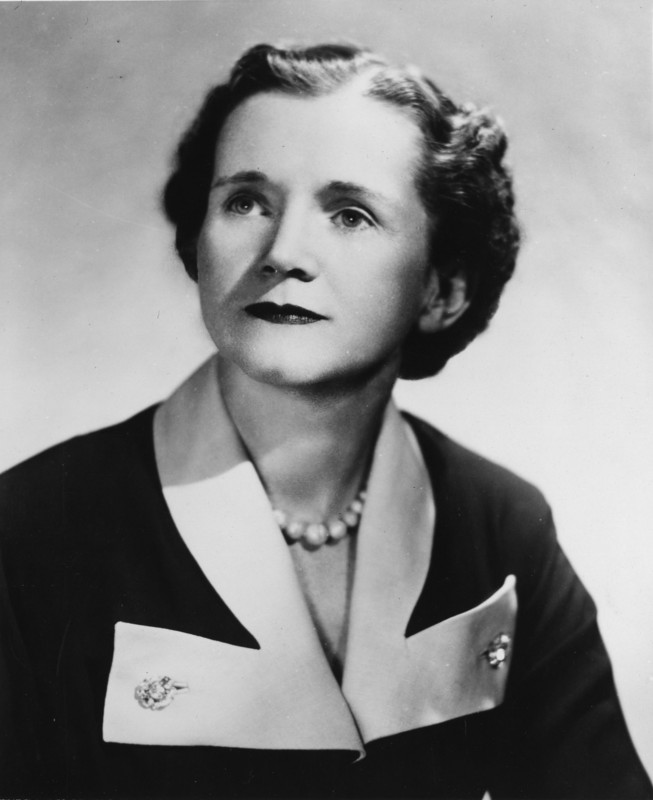 Rachel Carson was a pioneer in the field of marine biology. Growing up in Pittsburgh, she was no stranger to the air pollution caused by big plants and factories. As she got older, she began to write articles and journals about how this pollution affected ocean life, and how little regulation the output of these chemicals had.

Carson’s thesis throughout Silent Spring was that pesticides and chemicals used to kill pests on crops bleed into the environment and affect our water sources. These chemicals are involuntarily ingested by larger creatures when they eat poisoned insects. This could create a lethal cause and effect that could be harmful for future generations of plants, creatures, and humans. A secondary problem would come from pests becoming resistant to the pesticides, which would lead companies to create stronger, more dangerous chemicals. Three days after Silent Spring was published, the United Farm Workers convention took place, in which hard data was brought forward of the risks that pesticides had on humans. There were first-hand accounts of “skin rashes, dizziness and nausea, respiratory ailments…cancers and death faced by the farmworkers due to pesticide exposure.”[2] This was one of Carson’s major points–pesticides that were used before the 1950’s would be prevalent in species the next fifty to a hundred years in the future.

Although the book would eventually gain support, it first had to fight many battles. During the 1950s, female and male scientists had different outlooks on the world. Carson wrote that “[t]he balance of nature…is a complex, precise, and highly integrated system of relationships between living things which cannot safely be ignored any more than the law of gravity can be defied with impunity by a man perched on the edge of a cliff…Man, too, is part of this balance.”[3] The words she chose were poetic, and they expressed a deep connection to the natural world. These were determined as characteristics of being a woman. Therefore, she was discredited as a scientist. These remarks paired with a volley of negative book reviews from chemical plants and threatened corporations, all boiled down to the fact “she was a woman and she was challenging a cornerstone of industrial capitalism with a passion considered unbecoming of a scientist.”[4]

Silent Spring would be “the fuse that triggered the explosion culminating in the current wave of environmental activism…”[5] Thus, the modern environmental movement was born. It consisted of a growing consensus that the environment needed to be taken care of as humanity progressed. In the early 1970s, the use of DDT and other pesticides like it were banned in the United States and Canada. Rachel Carson had created a legacy–she had succeeded in being a catalyst of change to the dangers of using pesticides.