The Chicano Movement: A Short Overview 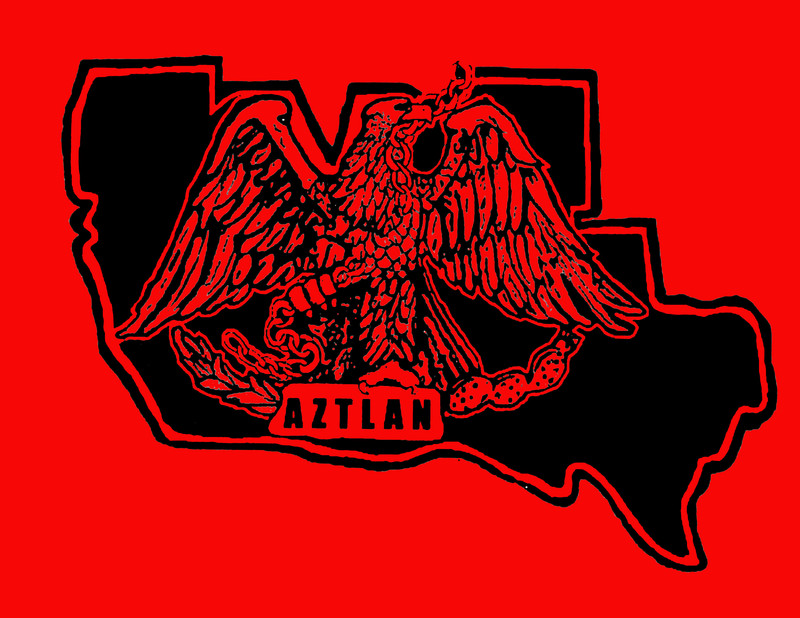 An illustration of the Flag of Aztlán, a prominent symbol of the Mexican American Civil Rights Movement

“Flag Of Aztlan used by La Raza Unida and other Chicano activists.” By Sukanara is licensed under CC0 This flag originally represented the United Farm Workers of America, and was soon co-opted by the political party La Raza Unida, and soon become a prominent symbol of the Mexican American Civil Rights Movement. The flag shows the Southwestern States, such as California, Texas, Arizona, and New Mexico, with the Eagle upon a cactus from the Aztec story of the founding of Tenochtitlan. This reminds Mexican-Americans of the land that they once inhabited.

The Chicano Movement, part of the various social movements that sprung up in the 1960s and 1970s, is perhaps best known due to the work of Cesar Chavez in California with the United Farm Workers of America. A lesser-known aspect of the Chicano movement occurred in Texas that consisted of school walkouts, colleges that catered to Chicano students, and a new understanding and sense of newfound pride, of Chicano Culture. Starting with the Zoot Suit Riots in the 1940s, and culminating with the coalescing of various academic, militaristic, and political groups to form, or less, a united Chicano front, now known as the Chicano Movement.

Starting in the 1960s, the uptick of minority movements, undoubtedly brought about by a general feeling of inequality and injustice in a nation that prides itself on bringing equality and justice to all, is perhaps best remembered in the Civil Rights Movement, which provided a better level of equality to African Americans. For Chicanos, who sought to be treated equally in labor and rights as well since the 1940s, when the Zoot Suit Riots took place, their answer was also a movement to reclaim their national identities.

The Zoot Suit Riots were a conflict between White and Chicano Servicemen due to the amount of fabric in Zoot Suits that were favored among Chicanos. The riots led to attacks against Chicanos and were made famous due to a murder trial. Chicanos were unlike many groups fighting for rights or for their stories to be heard. Much like Native Americans, the land that Chicanos resided on had, at one point, been theirs. Many writers had started to think about Chicanos how Frantz Fanon and Albert Memmi thought about those of African descent under the French. In this case, Chicanos were not simply victims of colonization itself, but also victims of internalized colonization. Quoted in an article entitled “Aliens in Their Native Land: The Persistence of Internal Colonial Theory”, John Chavez points to Tomas Almaguer, who summarized this concept in his book titled Toward the Study of Chicano Colonialism, by stating that “Mexicanos are not outsiders but are, in fact, an indigenous people of the land in question.”[1]

Mexican-Americans, who chose the term Chicano as a self-identifying and political term, were original inhabitants of the land before, as the evidence from the past states, the United States came in, took their land, and began to subjugate the Mexican American community. While it is common knowledge that many Chicanos were considered and classified as Caucasian, it was only on paper. In practice, many Chicanos were subject to discrimination and inequality. The case that immediately comes to mind is the case of Felix Longoria and the refusal of a funeral home to perform a service due to his being Latino. The Chicano Movement, then, did not seek to overturn a government or start a revolution. Instead, the Chicano Movement sought to empower Mexican Americans, and give them a voice. How they did this was varied, and depended on what group one dealt with. For many students, the Mexican American Youth Organization, (MAYO), and student walkouts were a way to showcase and reclaim a semblance of power, despite the potential consequences. Some, however, took political or militant approaches.

In the realm of politics, no group resembles the Chicano Movement as much as La Raza Unida, which translates to the United Race. In recent years, the party has not garnered the attention that it once did. However, La Raza Unida, which catered to and actively sought to represent poor blue-collar Mexican Americans, was perhaps at its most powerful in the 1972 Texas Gubernatorial Elections. In an article that detailed Mexican-American support for third parties, the evidence showed that compared to previous elections, “Data from 1972 revealed that the counties with the highest rates of Mexican American turnout in 1972 were largely those along the borderland region”, where La Raza Unida was far more active in recruitment and representation.[2]

In terms of militarization, the group known as the Brown Berets, a paramilitary-style organization that was a small connection to the Black Power movement, found a base in San Antonio. Here, the Brown Berets, so named for their signature brown berets and fatigues, appealed not only to gang members but also to veterans who wanted to do their part. For many, this wasn’t for militarization, but rather, for the “Pride aesthetic of Chicano Nationalism.”[3] For some, however, Chicano nationalism came in the form of journals, such as Aztlan.

Aztlan, a journal that focused on Chicano studies, was the first of its kind to focus on the field of Chicano studies that was peer-reviewed. In his article “Aztlan: How a Journal Built a Discipline”, Michael Soldatenko shows how Aztlan was responsible for a new paradigm in Chicano studies. As he states, a rise in Chicanos in academia ended with “their survival depending on publications.”[4] One of the sure ways to ensure that these publications were, indeed, publishes, was through Aztlan. By this particular avenue, the rubric and style guide that had been used by Aztlan became the standard. The Chicano movement was thus responsible for the formation of the first rubric and standard style for writing when discussing or writing about Chicano Studies, and the tradition continues to this day with successive editions of Aztlan.

The Chicano Movement, though close to sixty years old, still affects the nation today. There are new programs underway to record the stories of those who lived through such tumultuous times. In his article “Connecting to Activists and the Public through the Civil Rights in Black and Brown Oral History Project”, Max Krochmal shows that there are efforts to bring the Chicano Movement into the Public Sphere in ways that are accessible to the wider public. Through the Civil Rights in Black and Brown (CRBB) Oral History Project, Krochmal states that through “examining either “black” versus “white” or “Anglo” versus “Mexican”, CRBB aims to collect, interpret, and disseminate new oral history interviews with members of all three groups.”[5] By bringing these issues, these oral histories to the public, it can open new avenues for research, but also create a wider audience, thus laying the foundation for a wider understanding of the Chicano Movement.

In conclusion, the Chicano movement was more than simply having farmers strike or student walkouts in places like Crystal City. It was many parts that coalesced into a single movement that pushed Chicano Culture into the forefront of many hearts and minds, one that sought to further give credence to the idea that America was a nation of Equals. From the Brown Berets to La Raza Unida, and to publications such as the CRBB and Aztlan, the Chicano Movement continues to have many results that still affect us today.

[5] Max Krochmal, “Connecting to Activists and the Public through the Civil Rights in Black and Brown Oral History Project,” Labor: Studies in Working-Class History of the Americas 13, no. 3 (December 2016): 15.

Krochmal, Max. “Connecting to Activists and the Public through the Civil Rights in Black and Brown Oral History Project.” Labor: Studies in Working-Class History of the Americas 13, no. 3 (December 2016): 15-17.