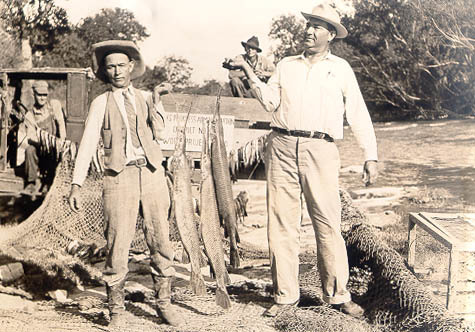 The Game, Fish, and Oyster Commission working to exterminate predators both fish and animals and this seems to be what they are engaging in, in 1935 at the San Saba River. They would donate the fish and animal meat to charity. (Prints and Photographs, Texas Game, Fish, & Oyster Commission. Archives and Information Services Division, Texas State Library and Archives.)

The state of Texas’ southern region is known for its fishing luxury, trophy game hunting, and cattle.  With all of the wildlife in the southern region, many people have engaged in the conservation of the wildlife and the conservation of fish, few have broken the law that protects wildlife and fish. People all over Texas abide by the laws that keep fish and wildlife safe as well.  This prime region is one with much historical worth in the conservation of wildlife and fish in the state of Texas.  South Texas’ problems with poaching, overfishing, and killing of birds in the 1800s and 1900s led to the formal organizations that help protect Texas fish and wildlife for a century after their creation. Small organizations start in Corpus Christi in the 1800s as they fight for the conservation and the sport hunting of animals.  Other groups in Central and South Texas emerge in the late 1800s and help create future game laws that affect the southern region of Texas’ fishing and hunting. The Texas Parks and Wildlife contributed to newly formed departments that focus mainly on the southern regions conservation.  The new developments of the conservation movement in Texas that had happened because of events in South Texas led to the future of Texas Parks and Wildlife.  There were illegal duck poaching, increase in out of state selling of animal hide and meat, and the over fishing of the Gulf.